Filed Under: Green and Eco, News

Divided by borders, assembled in hierarchies and motivated by the kind of competitive ideology shared by the neoliberal business class, this meeting embodies the self-interested conventions of the old world. Unsurprisingly, the context has resulted in a failure of shameful proportions.

“For the 21st time, we don’t expect much,” says Dominic Wind, core organiser of POC21, a grassroots alternative to COP21 taking place near Paris. “Over the last 20 years, carbon dioxide emissions have doubled. Our trust in this institution is gone.”

“We need the tools to create different buying and consumption patterns,” Wind continues. “Tools that are less destructive and more sustainable. Then we [will] form global communities around these tools, bringing people together to amplify their impact, exchange what works best and speed up the process of adoption.”

One of the participants at the alternative gathering, Daniel Connell, the New Zealand-born founder of a project to build a wind turbine for $30 (£20), is among those sceptical about the UN talks in Paris in December.

“The COP21 talks will not result in anything. If you hope they will, that hope is a negative thing. In having hope you are still engaging with governments, and in so doing wasting time that can be spent on actual solutions.”

Using an old bike wheel, disused printing plates and a couple of waste electric motors, one of Daniel’s small turbines can meet 25% of the power needs of an average suburban home. With accessible parts, basic skills and a little time, the project is making it feasible to step away from the fossil-fuelled power grid. 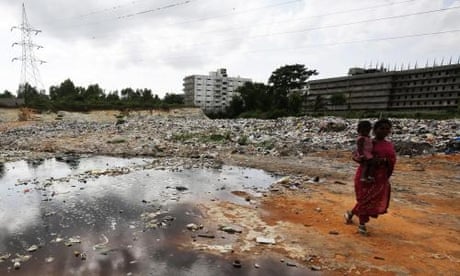 Another developer, Jason Selvarajan from Finland, has invented Showerloop, a system that cleans water as the water cleans you. As well as limiting water waste, it saves on significant amounts of energy needed to heat boiler systems.

A pivotal element weaving the POC21 projects together is the importance of open source, a methodology for collaboratively developing anything from software platforms to houses. Open source requires that the technical makeup of a project be shared, changed and improved by anyone who cares to participate, shunning patents and other legal restrictions to harness the combined creativity of the internet connected world.

POC21 has created a space where this solution-based concept can be applied to the most pivotal crisis of our age: climate change. It is both an incubator for a new sustainable tech infrastructure that can help us disrupt our carbon outputs and a symbol of citizens evolving towards taking the future into their own hands.

Read the full story here on The Guardian’s website!